A Comparison of Trump and Clinton Economic Plans

In our most recent newsletter, I discussed a few sources that offer aggregated polling information as polling averages are more instructive (and much less prone to cherry-picking) than any individual poll. For those of you who followed that advice, you’ve likely noticed that although Clinton is still ahead of Trump, the race has tightened a good bit. We had always planned to take a look at the economic platforms of the two candidates, but doing so is particularly important now given the close state of the race.

Two non-partisan sources that have compared the two candidates’ plans are the BBC and Politifact, and you’ll find their articles here and here. At a very high level, Clinton’s plans are largely a continuation of Obama’s approach along with specific proposals surrounding job training, an increase in taxes on those earning above $5m and rewarding companies that hire here at home. Trump, by contrast, is largely following the Republican orthodoxy in pushing for lower taxes and decreased regulation, although he is taking an unorthodox stance on decreasing immigration and policing trade.

The most comprehensive analysis of the plans we could find by a non-partisan party was completed by Moody’s Analytics. Moody’s assessed the plans using a few different scenarios which varied by the degree to which the President would be able to implement his or her policies. This level of success was dependent upon the composition of Congress. Their baseline assumption was that if current policies were continued, growth would continue roughly at the current trend.

Moody’s published their analysis of Trump’s proposals first, and you can find that analysis here. One of their primary findings was that decreases in revenue would not be offset by lower spending, and they 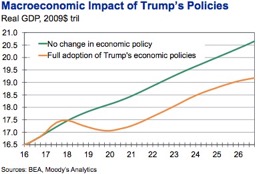 posited that the plans would lead to higher government deficits and corresponding instability. They also felt that his plans to renegotiate or scrap trade agreements while levying tariffs on some of our largest trading partners would diminish the U.S. economic leadership in the world and risk increasing protectionism around the globe. Lastly, they forecasted that decreased immigration if not outright net emigration would be detrimental to economic growth. They summarized the impacts as follows:

Even allowing for  some variability in  the accuracy of the  economic modeling and underlying  assumptions that  drive the analysis,  four basic conclusions regarding the  impact of Mr. Trump’s  economic proposals  can be reached: 1)  they will result in a  less global U.S. economy; 2) they will lead to larger government deficits and more debt; 3) they will largely benefit very high-income households; and 4) they will result in a weaker U.S. economy, with fewer jobs and higher unemployment. 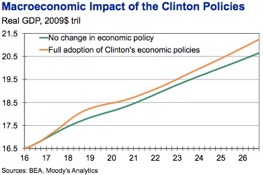 Clinton’s plans (here) forecast that her stimulus proposals would result in near term growth, but because the proposals were largely paid for by higher taxes (as opposed to deficit spending), they did not endanger longer-term economic stability. Further, because the increased taxes were levied on those earning in excess of $5m, they assumed any decreased spending by that group would be more than offset by higher spending by lower income groups. Longer term, immigration reform would lead to increased immigration and this typically leads to increased growth (as touched on in this great article by Morgan Hounsel).

Their summation of the impacts of Clinton’s plans is as follows:

Even allowing for some variability in the accuracy of the economic modeling and underlying assumptions that drive our analysis, four basic conclusions regarding the impact of Secretary Clinton’s economic proposals can be reached: 1) they will result in a somewhat stronger U.S. economy with increased GDP and more jobs; 2) they will mostly benefit middle-and lower-income households; 3) they have little impact on the nation’s fiscal situation, as they result in somewhat larger deficits but a mostly unchanged debt-to GDP ratio; and 4) they exhibit faith in the ability of government policy to positively influence economic behavior.

Moody’s conclusions aren’t particularly surprising since standard economic theory assumes that immigration is, on balance, of net benefit to the economy as is free-trade. Given that implementation of Trump’s policies would likely curtail both, most mainstream economists would forecast a negative impact to the economy (another firm, Oxford Economics, reached a similar conclusion in their study which you’ll find summarized here). As for Clinton, using a standard economic framework, the status quo nature of her proposals would be less apt to disrupt our current economic trajectory.